Palamu commissionerate in the state of Jharkhand consisting of districts of Palamau,Garwah and Latehar are better known for their alarming poverty levels, drought, hunger and starvation in extreme times resulting In deaths , absentee governance, highest levels of corruption, punishment transfers In terms of the community getting notorious and corrupt officials, equally corrupt political parties and its leaders. It is unfortunate but many civil society organisations are not far behind them and most of the development programs in the region are given to agencies who can tread the same path of corruption. Thus this region is steeped in deep corruption. As there are frequent droughts in the region, there is always speculation and declaration of drought is greatly looked forward as the natural calamity brings about bounty In terms of programs and resources . 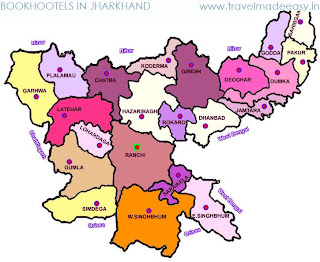 Map of Jharkhand – Palamu is the northwestern end bordering Bihar

TRAVAILS OF THE POOR
The poor are steeped in extreme illiteracy and their prime concern is survival of self and their families. They consider the poor governance and maladministration as their fate and hence in the absence of any opposition there is uninterrupted looting of the resources meant for the poor. In the absence of able leadership that works for the people’s cause the different political parties are at a collision course . Incidentally this region was earlier steeped in feudalism the traces of which are still existing to till date.

Large tracts of land called Gair Mazrua land also was usurped by the landlords. The mean existence of the poor at the behest of collection of mahua fruit and flowers – these resources – the trees also were under landlord’s control. The other attributes of feudalism are creation of bonded labour, child labour, using the entire family force of the dalits for domestic, agricultural and cattle rearing and grazing . The dalit women being subjected to sexual harassment were common features of the region.

Read the rest on the Bihartimes.com