Hyderabad: The heart wrenching story of Sameera Begum, who died after being pushed down from the Hyderabad’s historic monument Charminar by her tormentor Arshad Ahmad, has brought the cruel exploitation of the poor families by the money lender in to sharp focus.

In a scene out of the Shahrukh Khan’s blockbuster “Baazigar”, a money lender Arshad Ahmad threw Sameera off Charminar after making her sit on the balcony on the first floor of Charminar on Thursday last. The killer, who after his arrest told the police that the motive of the crime was to prevent the girl from revealing her sexual exploitation, had loaned an amount of Rs 14000 to Sameera Begum’s mother two months ago at an exorbitant interest rate of 40% and was recovering the money at the rate of Rs 200 per day.

The trouble started between the family and Arshad ten days ago when the family stopped repayment as their petty business was not doing well. Angered over this the money lender started threatening the family, specially Sameera and her two younger sisters.

Exasperated over this Sameera left home on June 9 promising to arrange the money and repay the amount to Arshad but never returned. The police was now looking in to the possibility that Arshad had confined Sameera to his home and subjected her to sexual exploitation.

After his ghastly act of pushing Sameera to ground, Arshad went to girl’s home in nearby Talabkutta area and told her family to check whether the girl who committed suicide at Charminar was their daughter.

Sameera Begum who was rushed to the Osmania Hospital with serious head injury and multiple fractures, revealed the name of Arshad in her dying declaration.

“I thought after the fall she will die on the spot and the police will treat as a case of suicide”, Arshad told the police.

Arshad said that he decided to do Sameera away because she was pressurizing him to marry after he had physical relationship with her. “Promising to fulfill her wish, I took her to Charminar and pushed her down”, he confessed.

Sameera’s family, headed by a petty trader Mohammed Ysufu is demanding death punishment to the killer of the girl. “We will not rest till he meets the same fate”, said a wailing Khursheed Begum. While the well planned murder of the girl has sent the waves of shock across the city, the factors leading to the crime have also left the people perturbed. 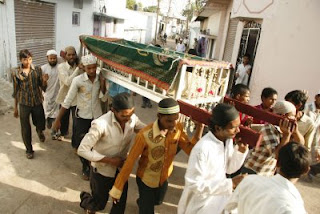 “This highlights the way the poor families of old city are being subjected to financial and sexual exploitation by the money lenders”, said Prof. Rehana Sultana, a social activists who work in the old city.

The Muslim dominated old city, where majority of the people are poor petty traders, has turned in to an open field for the money lenders who lend loans on the daily basis at exorbitant rate of interest ranging from 30 to 50 per cent to the people who don’t have access to the banks.

“It is not very uncommon that the families unable to repay the loan are subjected to violence and exploitation by the organized gangs run by the money lenders. The old city is ruled by such Pehlwans and Bhais who are in nexus with the police”, said another social activist.

Meanwhile the Congress legislator and film star Jayasudha expressing shock over the incident said that the government will do every thing possible to help Sameera’s famiy. “I will try to get some compensation to the family”, she said.

She rued that the film and media were showing the youth a wrong path leading to such ghastly crimes against women. “Don’t show such rogue elements as hero and lovers”, she told the media and film industry.