INTERVIEW/ Muhammad Yunus: Selfless side of humans can overcome crisis
DHAKA–A new business model that puts top priority on contributions to society instead of maximizing profits will hold the key to overcoming the current global financial crisis, Muhammad Yunus, a Bangladeshi economist and managing-director of the Grameen Bank, said in a recent interview with The Asahi Shimbun.

The winner of the 2006 Nobel Peace Prize urged Japanese companies to join his proposed “social business” initiative, which aims to put human selflessness into a market long dominated by the selfish pursuit of profits.

Following are excerpts from the interview: 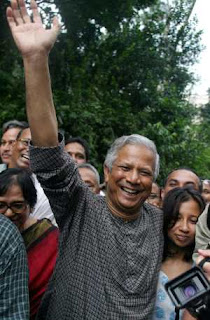 
Question: If we look back at what happened in 2008, one of the biggest events was the global financial crisis. It can be said that through excessive trust in the markets, businesses that focused only on profits have collapsed. What is your opinion?

Answer: It happened so suddenly, but it showed that those who knew everything, understood everything, and were confident in themselves were not correct. So (despite) expertise in understanding the financial world itself, it showed that we do not have the capacity to understand those cases.

The big pillars of the financial system just collapsed, and that was not realized (even) by experts weeks ago. That was a shocking part of it; people were not aware of it.

And then (there are) the causes of this. Always everybody was given to believe that the market is supreme, that “invisible hands” solve everything in the best possible manner, and there was nothing to worry about.

The market doesn’t solve everything.

In hindsight, they are saying that the reason is extreme greed, which led to the collapse. Or some say the marketplace has been used like a gambling casino. It’s no longer business; it’s gambling.

Everybody changed some fuzzy thing or built castles in the air. Those things didn’t exist, but everybody was made to believe they were there.

Secondly, under globalization, you suffer in a way from something you have not done, so it’s somebody else’s mistake. Somebody else’s greed makes everybody else suffer.

But the 3 billion people at the bottom have been hit the hardest because they are losing their jobs, incomes and food now that the economy is slowing down, factories are closing, jobs are being cut. They are the ones whose lifestyles suffer the most in a physical and miserable way.

One last thing I want to comment on is that we forgot that the financial crisis is just one of the crises in 2008. We forgot that in 2008, we had a food crisis. It was a massive food crisis, and it has not disappeared.

2008 is also the year of the energy crisis, when oil prices went up to $150 (a barrel) and so on. It has calmed down for a while, but the crisis has not disappeared; it is very much alive.

And one crisis that continued not only in 2008 but long before 2008 is the environmental crisis.

So this is a combination of these crises. These are not separate crises. In a way, they are interlinked with some connections. We have to see how we can redesign the whole system. This has to be done now.

What we can do? How can we raise a question that doesn’t ask the silly question of whether we should go for globalization or should we stop it.

If we gain from globalization that is desirable for everybody, we must ensure it’s win-win for both sides in the picture.

In the beginning, we do not feel comfortable because you are rich. “Why should I live with you?” I am capable, I have the technology, money. I can do it. That is not how globalization survives.

Everybody has to have their place, a place of dignity. That is the right spirit of globalization.

In the economic system today is the practice we call capitalism. We fundamentally misinterpret capitalism. The idea of capitalism means that we all have to be greedy people. We say business means business to make money. Profit maximization is the mission of business.

If we allowed the selfless part to be put in the marketplace, then the market becomes complete.

Why not create another kind of business to take care of the selfless part? We call it “social business.”

We can have both of the businesses since we all have two aspects and we can participate in both businesses. Then the marketplace will be more balanced. Then we can create a business to adjust poverty, deal with the malnutrition of children, the health of women, housing for poor people, drinking water for everybody, environmental issues.

These all can be addressed in social business. Social businesses are non-loss, non-dividend companies with a social purpos

We have created some of these companies in Bangladesh. One is the Grameen Danon (Food) company, which produces yogurt with all the micro-nutrients mixed in (and) sells it to malnourished children so that they regain their health. This company is not trying to make money for itself or for its owners. This company is trying to solve the malnutrition of children by joining as a business rather than as a charity.


Q: Social business is an unknown concept to the general public. You said it is a no-loss, no-dividend business working for social objectives. It needs capital investment, doesn’t it? What is the basic mechanism?

A: Investors first decide to use their money to address a particular problem, like drinking water. We have arsenic in drinking water in Bangladesh. I want to invest in drinking water so that people have safe water and don’t have to suffer from drinking arsenic. That is my objective.

I put the money in, and running this business means people have to buy this water. I do not give it to them for free. The company covers all the costs but it makes a profit. But I will never take it because this is not my intention.

My intention is to make sure people have good drinking water. I can get back my investment money, but my satisfaction comes when I have saved the lives of people who had arsenic in their drinking water.

Somebody may ask why you do not make money. I say the selfless part of people will do it.

Q: What are the profits used for? To improve the business?

A: Yes, exactly, so that the business will improve, expand. I started this when profits were made, used them to make it bigger and bigger.

We are creating more and more social businesses.

Q: Do these French companies take any profits?

A: They do not take any profits. They are social businesses, and they agreed to our conditions and creating them. … They can take back the investment money after a long period.

Q: Typical investors want to make profits. Do you think they are interested in a social business that makes no profit?

A: Don’t read books about it. Just rethink it for yourself. Now what I am saying is that instead of a charity, you can create a company and you can take your money back when you want to. So that is more powerful than giving it as charity.

All human beings have two aspects: a selfish aspect and a selfless aspect. That’s why we are demonstrating in the streets when we see something happening, some bad things happening, that cannot be accepted.

What is wrong that prompts you to demonstrate? The police come and beat you up, but you still demonstrate because you want to speak out, because you feel that strong and devout selfless part of you. We want to change things we do not like. … So when that spirit comes, then we will create social businesses.

Q: You have achieved a lot of success with your creation of Micro Finance. How do MF and social business interlink?

A: They have strong links because MF came from the direction of something different from conventional business. We created Grameen Bank not to make myself rich. That was not the intention at all. I created GB to help poor people, to create self-employment, so that they can generate an income. My intention is to help people.


Q: In Asia, China and India are emerging as economic giants. They are growing amid globalization and the free market. Is it possible for them to eradicate poverty if they continue on the same course?

A: In both India and China, the reduction of poverty is dramatic. China has brought poverty down, down down, quite similarly in India. So even (through) globalization and profit-maximization, (economic) growth has an effective impact on poverty levels.

In a private economy, poor people are left out. There are 47 million people in the United States without health insurance. This is an example (of what happens) if we follow the same procedure (of) existing capitalism. … If the United States has 47 million, in India, there will be three times more because the population is three times as much, and in China, four times as much.

Unless we have this completed capitalism in which both sides–selfless part and selfish part–work together in the market, you will have this problem.


Q: Asian people have had a kind of tradition or wisdom of a so-called sustainable economy, self-efficient economy, something like that. How can this tradition be used to eradicate poverty?

A: It is very important. Those elements are still in our culture. This is also an element of selflessness. In the United States, that part has been eliminated.

In a formal economic sense, if you have social business, you could express this aspect. Our selflessness is (expressed) much more effectively than among people in the United States. This is the beauty of Eastern society. We have those values that are very strong even today.

This tradition is very useful for social business. Because we care about our family, we say that family is the smallest unit. Then we feel for the community … and want to come back to our villages when we retire … . This is our feeling. You want to sacrifice your life to help people in your nation. This is very strong in Asian tradition. It is very helpful.

Q: What do you expect from Japan, Japanese companies, NGOs and people?

Today, they are one-dimension business people who see money, stock markets and nothing else. If they take off their profit-maximizing glasses and put on social-business glasses, they would see a completely different world.

Japanese companies have corporate social responsibility funds. They can use this money for creating social business instead of just using this money as charity. All these things can be very neatly done.(IHT/Asahi: January 14,2009)