A little more than a year ago, Rajesh Razdan quit his well-paying job with a global cellphone company to launch a small start-up to offer a slew of new services to cellphone users. India’s recent economic boom, he said, was the perfect setting in which to become an entrepreneur.

For his new venture, mCarbon, Razdan, 33, had developed sophisticated call-management technology that included blocking unwanted calls on cellphones — a feature he hoped to pitch to high-powered corporate executives.

By the time his niche service was ready, however, the worldwide financial meltdown had begun, drying up cash flows. He had to give the product a new spin.

“In a slowing economy, everybody looks for something extra for their money, so we quickly repackaged it as a service for the masses, not just high-end users,” Razdan said recently. “We said, ‘Our service will help you reclaim those personal moments that are lost when the cellphone rings or vibrates. When you are meditating or talking to your son at the breakfast table or driving — the service will allow only your preferred callers to get through to you.’?”

Airtel, a large Indian telecommunications company that quickly signed on as an mCarbon client, is planning to launch the “do not disturb” service nationwide soon.

The economic slowdown is the first major challenge faced by India’s new crop of entrepreneurs, forcing them to consider different business models and look for untapped markets. Many, like Razdan, belong to the first generation of risk-takers, who quit safe jobs and defied their families to launch start-ups in the rapidly expanding economy of the past decade. But after four years of growth topping 9 percent, the rate is expected to slow to about 6 percent this year.

The sagging economy, however, appears not to have curbed the dreams of India’s budding entrepreneurs. Analysts say that although the amount invested in start-ups dipped in the first quarter of 2009, the number of deals did not. 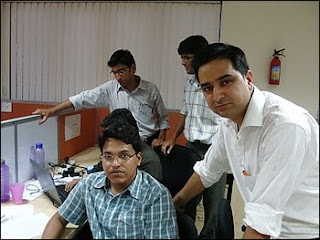 Rajesh Razdan, 33, right, with colleagues at his new start-up that offers a range of technological services to cellphone users. He had planned to target his firm’s offerings to high-end customers. But when the economy soured, he said, the company quickly repackaged them to appeal to “the masses.”


“These start-ups are a product of India’s economic boom,” said Arun Sahay, chairman of the three-year old Center for Entrepreneurship in Gurgaon, outside New Delhi. “The willingness to take risks has risen. For so long, Indian universities produced only job seekers. But now we want entrepreneurs, who are job creators.”

“With the economic slowdown, entrepreneurship has become a real career option, and students are queuing up,” said Sahay, whose center aims to help young people figure out how to turn their ideas into lucrative realities. “There is a fear that everybody is not going to find a job when they graduate.”

Many of the new entrepreneurs also face resistance from their middle-class families, which push them to seek secure salaried jobs rather than risk starting up a business.

“My parents’ generation sees risk as a gamble. My generation sees it as an opportunity,” said Arun Balakrishnan, 33, who graduated from a business school last summer and decided to start a venture with a classmate.

“My mother wept daily. Relatives said, ‘You are so intelligent, why do you want to do business?’ It just isn’t respectable enough. My partner and I literally begged our parents to give us two years to prove ourselves.”

“Indian start-ups are showing a certain maturity and pragmatism in reacting to the slowdown,” said Alok Mittal, managing director of Canaan, a Gurgaon-based venture capital fund.

“They are scaling back their ambitious, long-term projects and aiming for work that brings quick revenue so that they do not have to seek fresh rounds of funds during the slowdown.

“India is still growing,” he said. “There is a lot of room to grow for start-ups. Nobody is folding up.”