As India elects a new government, banker J S Parthiban tells how he has pioneered banking schemes to free people from the grip of exploitative money lenders in New Delhi and Salem, Tamil Nadu. In his experience, microfinance and microcredit can help the world’s poorest people and ensure banks are not purely profit-driven 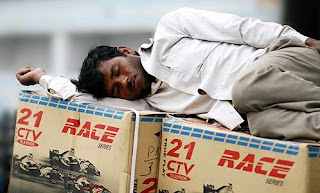 An Indian man sleeping on a stack of boxes in a street in New Delhi, India. Photograph: Jonny Weeks


I have always believed that banking is a service-oriented holistic business, rather than just an enterprise where customer service is only part of the overall profit strategy.

In 1998 I became branch manager of the government-owned Indian Bank at Connaught Place in New Delhi. I used my position there to help beggars and street vendors to manage their money intelligently and live a life of dignity. There were no bank schemes designed exclusively for them. Yet many people were selling flowers, water, toys and other things on the streets. I watched them doing their business, wondering what they did with all the money they earned.

I was astonished to find that they earned 500-600 Rupees ($10-12) a day, which not even a graduate or a government official earned. But they also had to pay bribes demanded by the police to allow them to operate on the streets. They were all street smart and the beggars took their work very seriously. But they were ignorant in money management.

Most of them came from nearby states such as Uttar Pradesh and Bihar, with a lot of dreams, leaving their families. They wanted to earn enough money to clear their debts back home, and get their daughters married. They came hoping to return home soon with lots of money and gifts for family members.

But the reality in Delhi was a lot different. There were no steady jobs and their earnings were never enough to make both ends meet. They would borrow money from money lenders, at very high interest rates, to get over their immediate problem – frequent borrowing would turn into a habit. They never earned or saved enough to clear their debts or take money back home.

Living alone, with no proper place to stay, many led a life of frustration with no way out. As a result most became alcoholic with some of them getting into the habit of visiting prostitutes.

Their situation would turn from bad to worse when they visited their villages back home during festivals or other occasions. They would borrow yet more money from money lenders and visit home with lots of gifts and money, hiding the reality of their lives in Delhi.

Once they returned to Delhi they would have to work twice as hard. The high interest rates charged by money lenders never allowed them to get out of the debt trap. Yet they were totally ignorant of the role that a bank could play in managing their earnings.

I wanted them to get out of debt and live a life of dignity. So I took the initiative to educate them. It took time and a lot of patience to earn their confidence. I would stand by their side, observe them and start conversations. I showed my genuine concern to understand their lives and businesses.

Seeing my sincerity, they opened up and began talking, but they rejected outright my suggestion of saving money in the bank. They complained that there was no money to save when they didn’t even have enough to make both ends meet. My persistence convinced them at least to give it a try, with small savings to begin with.

They had no idea how to go about it. It was difficult to open a bank account in those days. You needed many documents, such as the PAN (Permanent Account Number) card for tax purposes, ration cards and proof of residence. I made sure that my bank staff made them comfortable and that they understood how to open a savings account. In a few initial cases, I even took their personal guarantee. Their need was genuine and I took the risk.

The next logical step was for them to open a fixed deposit, which required less convincing. We opened almost 500 savings accounts and 300 recurring deposit accounts for beggars, newspaper vendors, fruit vendors, tea and pan wallahs, shoe shine boys, restaurant waiters, ‘auto rickshaw’ and taxi drivers, housewives, police constables and inspectors – everyone opening a bank account for the first time in their lives.

Another person was worried about how to educate his son in a decent institute but found that the bank could take care of the financial aspect. A lady who used to sell fruits saved enough money to get one of her daughters married and came back again to set up another account with us.

Now I am the branch manager of the India Bank near Salem, a city of over 750,000 people in Tamil Nadu. The state government initiated Self-Help Group schemes, mostly for women who had hardly stepped out of their houses. The scheme gives them a chance to come out of their shells and become a local leader. The banks lend money at a low interest rate for their needs. I encourage people to form such groups and to benefit from low-cost loans. Under the scheme the groups can distribute the loan amongst themselves, charging an extra 1%. The additional amount is saved by them for future lending to others in the group at a fraction of the rate.

My branch has helped around 188 Self-Help Groups, with loans totaling 22.5 million Rupees ($50,650). It gives me great joy to see so many groups getting prizes for their performance from the Tamil Nadu government.

In one poor village I discovered families who were cutting trees for firewood and brewing illicit alcohol for their livelihoods. It was a life they despised but they knew no other way to make a living. Many of the husbands were alcoholics, making the life of the women and children a constant hardship. I listened to their stories and wanted to do something. I convinced them to take a loan from the bank to buy buffalos and work hard to change their lives.

Today they are selling milk and converting buffalo dung into bio-gas. There is no more brewing in the village, and the cutting down of trees in the forest has stopped. They have already repaid their entire loan. Life for them has taken a complete U-turn for the better.

We have worked out other schemes to empower individuals to live a life of dignity, including auto-rickshaw drivers, policemen, prisoners, and even eunuchs who are too often marginalised. I am personally organising meetings with them to explain bank schemes that will empower them economically. They have understood this and are now saving with the bank, which is playing a key role in transforming society in and around Salem. It gives me great satisfaction to bring happiness to so many poor individuals and their families.