‘Agri business for rural India can do what Information Technology has done for urban India.’

Ahmedabad, Jan. 17 The food outsourcing business from India has an opportunity of $5 billion as of today, said Mr Piruz Khambatta, Chairman & Managing Director, Rasna Pvt Ltd, at Amaethon — the fifth edition of the Agri-Business Summit of the Indian Institute of Management, Ahmedabad.

But it is still untapped potential, said Mr Ajit Kumar, Joint Secretary, Ministry of Food Processing Industry. “Only six per cent of the total amount of food produced in the country is processed. This has led to an annual loss of Rs 33,000 crore in the agricultural sector through perishable commodities,” said Mr Kumar. He said this was the single biggest reason why agriculture was becoming unviable for the farmers and they are diversifying to other sectors. 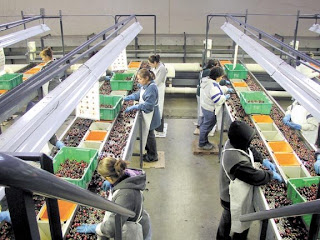 Mr Khambatta said there were several fruit and vegetable varieties in India such as the sweet lime or mosambi, which can be promoted and exported as an exotic fruit, but was not explored.

Value addition, according to him, is the biggest need of the hour and special attention should be paid to packaging the products. At the same time, although the Food Safety and Standard Authority has been set up, he urged the students to understand FDA and Codex specifications required in the global food business.


“Agri business for rural India can do what Information Technology has done for urban India. India should be promoted as the food factory of the world in terms of both production and marketing,” he said.

Tastes are internationalising, even Walmarts are having separate shelves for Indian cuisines, as it is one of the top three cuisines in demand in the world today, and quality from India is no longer questioned.

The biggest factor in India’s favour in the world food market is that of a low-cost advantage. Agri-business could become the safest bet for India during this recessionary period, he added

Mr A.K. Dhagat, General Manager, Mother Dairy, Amul, told how Amul was able to bring together independent milk producers to form a successful co-operative in the milk industry. “Milk will always remain our core business, but going forward, we will focus on the Amul Preferred Outlets to market our other products.

Mr P.K. Laheri, Former Chief Secretary, Ministry of Finance, Gujarat said that availability of easy credit was the biggest road block to the development of the industry. While income from the agriculture sector had grown from Rs 9,000 crore to Rs 40,000 crore in the past few years, the effective level of credit has been stagnant.


“The proper management of land, irrigation, seeds, pesticides, fertilizers, storage and credit are the seven areas which should be worked upon to bring about a change in the agriculture sector and you guys are the ones who can do it,” he said.