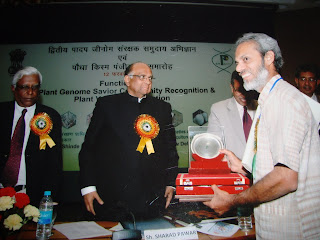 Debal Deb is an independent researcher based in Kolkata. I have had the pleasure of knowing him for quite some years now, and I admire his work, his dedication and his commitment to the cause of agriculture and farmers. He runs an organisation called VRIHI, which in Sanskrit means paddy. No wonder, Debal has been working on paddy issues for quite long now, and as you all know West Bengal is a paddy growing region.

On Feb 12, he was recognised by the Plant Varieties Protection & Farmers Rights Authority in New Delhi for conserving and characterising 416 traditional rice varieties, which includes Jugal, a double seeded variety and Sateen, a triple seeded variety. I am so glad that his exceptionally rich work has been finally recognised by the PVPFRA. The award was presented by the Agriculture Minister Sharad Pawar.

In Karnataka, I had recently visited a farmer who evolved a rice variety called Mysore Mallige. In a test carried out by the University of Agricultural Sciences, Bangalore, his variety out-performed the popular high-yielding variety that has been developed by the University. The farmers carries a certificate from the university detailing out his achievement. I narrated this example at a conference jointly organised by the Alumni Asoociation of the UAS, Bangalore and the Department of Information, Karnataka, in Bangalore today. Delivering the keynote address, I asked as to what is the purpose of recognising this farmers variety, when it is not being promoted and released by the State Department of Agriculture for cultivation. If it is performing better than the best paddy variety, and irrespective of the fact whether it has been developed by a farmer or a scientist, the variety should be made available to farmers. The State Agriculture Minister Mr SA Ravindranath was present.

This is not an exception. I find all varieties that have been developed by farmers receive only certificates as recognition. But otherwise it gets a step-motherly treatment from the scientists and the State governments. What is the use of recognising farmers varieties when they are not being put in the official system for release and cultivation. When will the scientists over come this superiority tag that they self impose on themselves? Why don’t they also accept that farmers have traditionally been breeders, and still have the knack of developing superior varieties?

It is primarily for this reason that farmers are reluctant to come forward and register their crop varieties with the PVPFRA. They feel that the farmer-bred crop varieties would be gobbled up by the system, and they will not get their due share. Some even fear that their varieties would be re-released under a different name by the universities. The PVPFRA therefore has a monumental task for confidence building among the farming community. Unless PVPFRA takes up this exercise in right ernest, I don’t think farmers will come forward to get their varieties registered. Much of farmers innovation would therefore remain hidden.

In the days to come I will bring more such examples to you.