Ex-ABB chief (and GM board member) Percy Barnevik is making a different kind of subprime loan: to India’s very poor. 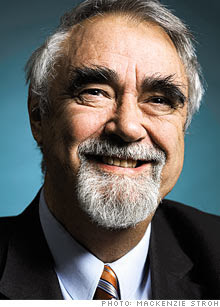 Barnevik, 67, is best remembered as the star CEO of ABB, the giant Swiss-based electrical engineering company, from 1988 to 1996; he was then chairman of Investor AB, the business vehicle of Sweden’s Wallenberg family, for another five years. He still holds a few retired-CEO jobs – including the unhappy one of being a General Motors director – but his passion is an organization called Hand in Hand International, which he came to four years ago, when it had 30 employees; today it has 6,000, plus 20,000 volunteers.

Barnevik bills himself as its “advisor,” but he is its main benefactor and driving force. He spends about 80% of his time on Hand in Hand and its mission of raising living standards among the poorest of the poor, starting in the South Indian state of Tamil Nadu. As he made clear when I spoke with him recently in New Delhi, he isn’t just helping poor people, he is building businesses. “Everything I learned as a CEO applies in this world as well,” he says.

Hand in Hand’s model is microfinance, but with several important differences. Like Grameen Bank and others, it makes tiny loans (average size: $125) to groups of women who are starting or running businesses. Unlike most of those lenders, Hand in Hand insists on extensive training for the borrowers before advancing the money, because those little businesses need to succeed. Hand in Hand targets the very poorest; most have never operated in the cash economy at all and aren’t ready to run even a simple business. “We teach 75,000 women a year to read, write, and do basic math in 150 days,” says Barnevik.

Then comes training in finance, entrepreneurialism, and basic operations in one of many possible businesses, such as baking or making jute bags. Only then, after three to four months, does cash follow, and it must go directly into the business; some microlenders don’t monitor the cash, which may then go into consumption.

The model is different in other ways as well. Beyond microlending, it focuses on improving health, cleaning up village environments, involving the poorest in democracy, and getting children (more than 30,000 at last count) out of jobs and into school. Those elements reinforce one another to create a system Barnevik insists must become self-sustaining; Hand in Hand may bring in new schoolteachers, for example, but the villagers must pay them. Otherwise he’s just creating dependency, not prosperity.

Hand in Hand reaches about 350,000 Indian women in 200,000 small businesses, and while continuing to grow in India, it is also expanding into Afghanistan, South Africa, and China. The great promise, Barnevik says, is helping the billion people globally who live on less than a dollar a day. Consider the math: He figures it costs $200 on average to create a job in the developing world, and the developed world currently spends about $110 billion a year on aid. No, it can’t all be redirected into programs like his, but divert just a bit of it, and in ten or 20 years you’ve made a huge impact.

A couple of timely thoughts inspired by Barnevik’s story: First, “subprime” is a cultural notion, not just a financial one. By conventional criteria, no one would ever lend a cent to illiterate women in South Indian villages, but Hand in Hand says its repayment rate is 99.7%.

Second, as we leave the season of giving and enter a challenging new year, we’re reminded that the most valuable thing each of us has to give isn’t money. Barnevik has given about $17 million to Hand in Hand, but that isn’t what has made it so effective. For him and for the rest of us, the most serious gift – arguably the only serious one – is our knowledge, abilities, and passions.