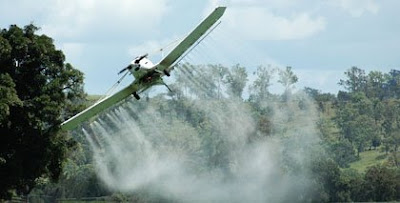 [This picture is from OpEdnews.com]

This is disturbing news. A report published in the Canadian newspaper The Globe and Mail (April 1, 2009) quoting a study published in an American medical journal Acta Paediatrica says that the harmful effects of chemical pesticides can be passed on from generation to generation.

The report quotes Paul Winchester, a professor of clinical paediatrics at Indiana University’s School of Medicine, and also a practising neonatologist at the Riley Hospital for Children, as saying: In one study baby rats exposed to atrazine, an herbicide that is banned in European countries, were born with no birth defects. But they developed problems including infertility, kidney and prostate problems, cancer and shortened lifespans as adults – and passed them on to their offspring.

Atrazine, a persistent pesticide, is widely used in India.

This study is shocking indeed. So far we were made to believe that the harm pesticides cause is immediately apparent. But Dr Winchester’s study goes much beyond and explains how pesticides can have long-term problems in humans. Maybe I alone was unaware of the long-term impact of some of the pesticides, and I therefore thought it would be useful to share this disturbing news report. I am sure you will agree the urgent need for more long-term studies to ascertain the effects of pesticides before the approval for its application is given.

If this is true of pesticides, I wonder how can the Genetic Engineering Approval Committee (GEAC) be satisfied with the so-called long-term tests done by Mahyco on Bt brinjal. After all, GM crops like Bt cotton and Bt brinjal also produce a toxin within the plant, which means the chemical pesticide has been replaced with a biological pesticide. The longest toxicity tests, which are for only 90 days, cannot in any way assess the long-term effects like the development of tumours or cancers from such genetic modification. No safety can be concluded about Bt Brinjal based on this, and considering the above mentioned study on atrazine exposure in rats, it is obvious that the true impact can only be known when research spans for a few generations.

In the laboratory studies, the first generation of baby rats born with exposure to atrazine herbicide carried no birth defects, but as they grew old they developed serious problems, and then passed it on to their next generation. In the case of GM crops, we need experiments on rats to continue for several generations to know the real impacts. I don’t understand why should the GEAC be in a tearing hurry to sweep scientific scrutiny under the carpet?

The news report entitled Risk of birth defects linked to month of conception is pasted below.

Babies conceived in the spring and summer are more likely than others to be born with a range of birth defects, according to new research. A possible reason: The levels of pesticides and other agrichemicals in surface water happen to peak at the same time.

The U.S. study, published in this month’s issue of the medical journal Acta Pædiatrica, relies on data from the U.S. Geological Survey, the Environmental Protection Agency and the birth certificates of 30.1 million babies born in the United States from 1996 to 2002.

Lead author Paul Winchester, a professor of clinical pediatrics at Indiana University’s school of medicine, and his colleagues found a strong association between the increased number of birth defects in children of women whose last menstrual period occurred in April, May, June or July and elevated levels of nitrates, atrazine and other pesticides in surface water (streams and rivers) during the same period.

This correlation was statistically significant for half of the 22 categoriesof birth defects reported in a Centers for Disease Control and Prevention database from 1996 to 2002, including spina bifida, cleft lip, clubfoot and Down syndrome.

“No one has ever said to a pregnant woman, ‘Your month of conception putsyou at risk,’ ” Dr. Winchester says. “It’s not in any textbook.” Even mothers who did not report well-known risk factors, such as drinking alcohol and smoking, diabetes or advanced age, had higher overall birth-defect rates for babies conceived from April to July.

In addition to babies born with severe medical problems, birth defects are the leading cause of infant death in the United States, accounting for about 20 per cent of all deaths.

Dr. Winchester says his interest in a possible connection between chemicals commonly used in agriculture and birth defects was piqued when he moved to Indiana, where he is also a practising neonatologist at the Riley Hospitalfor Children.

“What most impressed me when I came to this region of the corn belt is how many birth-defect babies I was seeing, compared to other places I’ve practised,” he says.

But he found that the effects appear not to be limited to farming communities. “Everyone wants to believe ‘it’s not going to affect my life over here in the suburbs,’ ” he says.

The study shows only a correlation between pesticides and birth defects. More research is necessary to prove causation, Dr. Winchester says. Still, without the parallel spikes in water contamination and birth defects, the study could have exonerated those pesticides measured. “It didn’t do that,”he says.

There is a growing body of research raising concerns about agrichemicals. A study found that women exposed to pesticides through gardening or proximity to agricultural crops have an increased risk of giving birth to offspring with neural-tube defects and limb anomalies. One current limitation of research in this area is a lack of consistent data- for instance, many states, including Indiana, do not routinely collect information on the levels of agrichemicals in drinking water.

Researchers hope that they can identify possible biological mechanisms that might explain how pesticides could cause birth defects and other long-term developmental problems.

Preliminary evidence suggests that pesticides may function in the same way as the controversial chemical bisphenol A, a plastic-making compound able to act like a female hormone. Not only can it disrupt the hormonal systems of living organisms, but it does so at very low doses.

And similar to BPA, pesticides’ harmful effects may not be immediately apparent.

In one study, Dr. Winchester says, baby rats exposed to atrazine, an herbicide that is banned in European countries, were born with no birth defects. But they developed problems including infertility, kidney andprostate problems, cancer and shortened lifespans as adults – and passed them on to their offspring.

That means agrichemicals could have effects for generations to come, he says.