From Microfinance Into Microinsurance

The financial services industry is facing unprecedented challenges worldwide due to excessive risk-taking. Complicated investment vehicles, insufficient transparency and excessive swapping of credit default risk have had a severe and pervasive impact on confidence. The world’s most advanced markets for financial services are reeling in uncertainty.

Standing in stark contrast to these perilous markets is the largest, most underserved market per capita in existence today: the low-income population in developing countries. According to the International Finance Corporation in a joint report with the World Resources Institute, this population of low-income consumers “at the base of the pyramid” has $5 trillion in annual purchasing power globally.

This market is significantly underpenetrated, and thus presents a huge opportunity. There is especially strong and resilient demand for the most basic financial services, which in turn has driven tremendous growth and investment in the microfinance space in recent years. The industry has seen tenfold growth in 10 years and microcredit now serves 150 million customers.

Investment dollars are following. Leaders such as Nobel laureate Muhammad Yunus and Fazle Abed, who labored to demonstrate the power of microcredit as an alternative asset class, have catalyzed a flood of funds and firms investing in the space. From development banks like Germany’s KFW to large private institutions like Citibank, global players do not want to miss the boat on this rising tide.

In fact, the success of so many microfinance initiatives leads experts to believe that the industry is poised for further accelerated growth.

Credit is only one of the demanded financial services. Like their counterparts in developed markets, the populations of emerging markets demand the range of financial services, including savings, remittances and insurance.

Insurance is especially needed. A recent 100-country landscape study demonstrated a market demand exceeding one billion people. After all, in emerging markets there is the same inherent desire to protect your possessions and safeguard your family against devastating financial losses such as death of a breadwinner or crop failure.

But poorer people live even closer to the edge, making them particularly eager to manage downside risk. People lie awake at night worrying they will lose everything, wondering how to prevent or recover from such a catastrophe.

Remarkably, this natural market for insurance products remains largely unpenetrated today, with only 3% of people in the world’s poorest countries able to access any type of insurance. 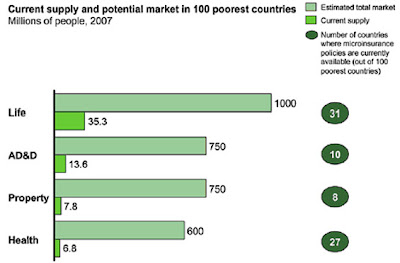 The way to capitalize on this massive and growing demand is via microinsurance: insurance policies sold in high volumes at low prices to low-income people.

For example, Hollard-Edcon in South Africa profitably sells accidental death and disability policies for $3.93 to $6.61 a month, with a $2,360 payout. Similarly, Tata-AIG in India sells a life and savings product with a $1,320 payout. This is a great deal of money for a poor family to get back on its feet. At the same time, when these policies are sold in large numbers (several schemes have hundreds of thousands of beneficiaries), with transaction costs kept low, these policies generate healthy profits for the insurance companies.

In recognition of this immense market opportunity, a number of commercial insurers have entered this space globally, forming partnerships with large distributors to meet the strong demand. Zurich Financial Services has microinsurance operations in South Africa and China; CNP Assurance, France’s leading personal insurance company, partners with China Post; AIG runs microinsurance operations not only in India but in South Africa and Uganda; and a number of regional insurers manage their own microinsurance businesses.

The involvement of commercial insurers is driven by a number of imperatives. First, insurance markets in developed countries are relatively saturated. Second, within fast emerging markets, today’s low-income policy holder is tomorrow’s middle class, a budding market of hundreds of millions of upwardly mobile people. Third, regulators who are often wary of foreign insurers take well the idea of coverage being extended to the poor in their countries. Finally, and most important: Done right, microinsurance is a rapidly expanding and highly profitable business.

Research shows that existing microinsurers are generally positive about their environment and prospects, with some projecting a doubling in policies, in the many tens of thousands, annually. Yet the market remains significantly underserved, creating a vast opportunity to reach a large number of customers with good value insurance, whether from the base of existing insurers or through retail distribution networks.

These distribution networks have reached unprecedented scale: from mobile phone companies, to microfinance institutions (MFIs) to supermarket chains and churches. Millions of customers who were previously off the grid are now within reach.

MFIs, for instance, often have effective distribution systems and huge and captive client bases in excess of 100,000, and sometimes 500,000, low-income people. There is the infrastructure to offer insurance to clients, but these MFIs lack some expertise, for example, on how to price and manage insurance products. That is a gap commercial investors are well placed to fill.

Regardless of the country and type of insurance product, there are a few key features of successful microinsurance businesses: large volumes, simple product design, flexibility through short-term products and efficient administration.

The current financial crisis has had a limited impact on demand for microinsurance, which is an asset class largely non-correlated to the market. With a likely drop in demand for insurance products from customers in developed countries, the microinsurance market is even more attractive in relative terms, and must surely be part of a wise strategy for growth.

Indeed for investors coping with global financial markets that are volatile and often disappointing, diversification remains essential. The future of financial services must lie partly in these and similar non-correlated assets, underpinned by rapid transformations in demography and strong demand in emerging markets.

The growth of microcredit and microinsurance investment marks only the beginning of a significant trend, and an unusual opportunity to diversify risk while achieving strong returns. Given the positive impact on low-income consumers, there is the added prospect (attractive to many of us who seek meaning as well as money) of achieving profit with purpose.

Dr. Andrew Kuper is president and founder of LeapFrog Investments, the world’s first microinsurance investment firm. He can be reached at andykuper@leapfroginvest.com.