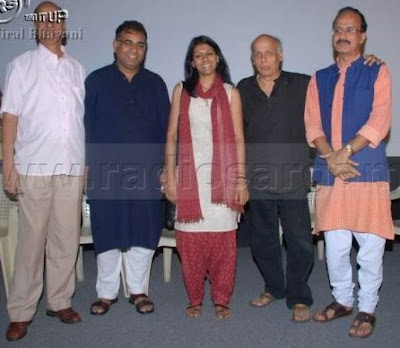 This is a picture from the Mumbai launch of the film “Poison on the platter.” Standing (left to right): Admiral Vishnu Bhagwat (retd.), former chief of Indian Navy; Ajay Kanchan, director of the film; Nandita Das, film actress; Mahesh Bhatt, film maker; and I.
“I am a soldier. And all through my life I thought we were fighting the enemy at the borders. But I now realise that the real attack is not from across the border but from inside the national borders. It is our food that is under attack now, ” said Admiral Vishnu Bhagwat, former chief of the Indian Navy. He was reacting after watching Mahesh Bhatt’s documentary “Poison on the platter,” screened at the Fun Republic Preview Theatre in Andheri, Mumbai, on Feb 27.
The film was screened to a packed house. People were sitting in the aisles, trying to crouch in every little empty space.
In an obvious reference to the overwhelming response from people across the country who were wanting to watch the film, make copies and distribute it widely, and express their angst and disgust at the nexus that operates between the regulatory bodies on the one hand and the companies dealing with research on genetically modified crops/foods, Mahesh Bhatt in his own indomitable style said: “When a fire breaks out, it does not require a PRO to promote it.” The fire, he said has already started and is spreading fast.
Expressing faith in the peoples’ wisdom and intellect, who may look to be ignorant but are certainly not foolish, Bhatt said that as the message spreads through the film, as people become aware of the inherent dangers, public opinion is swelling against GM foods. The film has surely ignited passion. “This is the fire that I am talking about.”
“I am not surprised,” he said, and added : “I wanted the people to know, and that is why I made this film. You can call me a fear-monger, but I think I have a responsibility towards this nation, towards the people of India.” No wonder, Mahesh Bhatt is now flooded with invites and requests from across the country. He is being asked to come and launch his film, and explain the issue to the people.
Well-known film actress and director, Nandita Das too came. And as expected, became the darling of the media. She told me that she came because she wanted to understand what the issue was all about. And after watching the film, she too felt outraged and therefore came forward extending her support for the cause.
Not only the celebrities, the audience too was visibly upset. There were doctors who got up and extended support. They said that they were in a position to spread the message far and wide. “After all, people come to doctors whenever they fall sick, and we can tell them to be careful about GM foods,” Dr Atul Shah and his wife, both doctors, told the audience. Dr Parvish Pandya, an environmentalist, offered to make thousands of copies of the film and take it to schools and colleges. Anand Shah, a jeweller, too wants to make copies and take it to the urban middle class. Pravin Jahangir, a well-known activist, even prepared a long list of people and groups that have to be involved in the battle to save our food.
These were only a few reactions.
I was amazed. As people walked upto me and offered support, in whatever form they could extend, I was overwhelmed. I felt little in front of these people who were not only moved, but felt motivated. They are the real catalysts, they are the real changemakers, and they are the real heroes. You can never be sure of human endeavour. Once people get inspired, they can really move mountains.
After New Delhi’s launch of the film (on Feb 4), Mumbai was the second stop. And like New Delhi, Mumbai too has not disappointed. In fact, the film has sown the seeds of concern in the minds of the people and I think that is what Mahesh Bhatt probably was expecting. The director of the film, Ajay Kanchan, is clealry excited and at times appears agitated. He is now more charged, beaming with new found energy, from the people’s reaction. “This is what I had anticipated,” he said, adding “this is by far the best film I have made, a film that will surely bring about a change in people’s perception about the food they eat.”
Back into the hotel, I open my mail box and find updates from my colleagues in Punjab. They have presented a basket of brinjals to the Chief Minister Prakash Singh Badal. Explaining why they presented brinjal to the Chief Minister, Kavitha Kuruganthi said she wanted him to know that the gift of brinjals was with a specific reason – THIS COULD BE ONE OF HIS LAST CHANCES TO HAVE SUCH NATURAL BRINJALS. Once the Government of India approves Bt Brinjal, he would have no choices left with regard to eating particular kinds of Brinjal. He would not know which brinjal is what, by appearance. Natural brinjals will get contaminated by the GM Brinjals as genetic contamination is inevitable.”
Kavitha was joined by Umendra Dutt, director, Kheti Virasat Mission in Punjab. They are certainly not alone. Krishna Prasad of the Sahaja Samrudha in Bangalore/Karnataka too has been sending a parcel of brinjals to the State Health Minister for nearly a week now. In neighbouring Kerala, I am No Lab Rat campaign was launched at the Cochin University of Science and Technology.
Justice Narayana Kurup (Retd.) launched the campaign. Film actor Anoop Chandran, All India Kissan Sabha State Committee Member Com P K Mathew, PUCL treasurer and trade union leader Mr Jacob Lazer and Purushan Eloor, Student union leader Ms. Asha joined the event. The event was jointly organised by Thanal, PMVS and PUCL under the banner of the Coalition for GM-Free India.
You are right, Mr Bhatt. The fire is spreading